PowerBoat TV is a weekly half-hour television show focusing on powerboats and the boating lifestyle. From fish boats to luxury cruisers, great destinations, and helpful DIY segments, we cover what’s of interest to boaters at large and have been doing so since 1990! PowerBoat Television is broadcast in HD across Canada on Global Television on Saturdays at 11:00 AM, and on Sundays at 6:30 AM in Alberta and British Columbia.

To catch the show at any time from anywhere you can also watch our episodes right here in HD, one week after they have aired. If you are looking to catch our non-current episodes, you can see all the shows from 2013 to the present online right here as well. 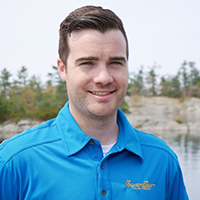 Drew McMillin is a Producer and Co-Host of PowerBoat Television. An avid waterskier, his summers growing up were spent behind wheels and wakes on Peninsula Lake in Huntsville, ON. Drew’s first boat, a 1962 Boston Whaler 13 Sport, was a gift from his aunt when he was 10 years old and still runs like an unsinkable dream to this day. It also played an important role in his commute to Deerhurst Resort, where he ran the waterski school for many years.

Drew graduated from the University of Ottawa with a degree in finance in 2013 and began work at an accounting firm in Toronto. After earning his CPA designation, he did a career “180” and enrolled at the College of Sports Media in Toronto to pursue passions for sports and television. Upon completion of his diploma in Sports Broadcasting, he worked as a highlight producer in TSN’s SportsCentre newsroom, before moving way up north to Timmins, ON, where he worked as a Video Journalist with CTV News Northern Ontario.

Drew’s dream is to one day own a house on a private waterski lake in Florida with separate boats for slalom and surfing. For now, he’s happy living the dream of co-hosting PowerBoat Television, the number one boating show in North America.